You don’t want to miss it!

CUCOS is going to welcome the new year with a free entry recital at:

Pieces to be played

Watch out for more details and we hope to see lots of you !

CUCOS want to thank everyone who came to our first rehearsal today and made it successful. Let’s keep it up！

The Chinese Instrument Division is looking for players of Erhu and Pipa. We have the instruments, we need you to play!  Come and join us by emailing Cassie at zy239@cam.ac.uk to indicate your interest.

The Western Instrument Division hopes to see more musiciants turning up for the rehearsals.

CUCOS is an experienced orchestra that holds concerts, recitals and performances on Cambridge’s major stages. We aim to promote Chinese music, performed using both traditional Chinese instruments as well as standard Western orchestral instruments.We are the only music group that features instruments of contrasting origins on the same stage and even in the same composition –it will be a truly unique and amazing experience with us, no matter what instruments you play!

Last year, we successfully presented a charity recital, three other recitals in coordination with other music groups, wonderful performances on CNY GALA, CNY BALL as well as Robinson May Ball, and a groundbreaking annual concert. This year, more exciting events will come up on stage- there will be plenty performing opportunities with us, from solos to full orchestra performances. Musicians of all skills levels are welcomed and there will be NO auditions.

Our first Rehearsal will be held in:

We look forward to meeting you in our first rehearsals and please bring along your instruments if you have.

Please refer to the term card for currently planned activities.

Have a wonderful year ahead.

CUCOS Chinese Instrument division will be participating in this year’s Intercultural Expressions Concert presented by the Centre for Intercultural Musicology at Churchill College.

CUCOS will be performing in Act III

Czardas by Vittorio Monti
Kok Foong Lee (Erhu – fiddle)
Kok Foong Lee plays an erhu adaptation of Vittorio Monti’s Hungarian dance for violin. The conductor of CUCOS, Kok Foong was a prize winner in the Malaysian National Chinese Orchestra Solo Competition in 2009. He is a PhD student in Chemical Engineering at Queens’ College.

Beautiful Africa by Yu Qingzhu
Chi-Chen Wang (Yangqin – dulcimer)
Chi-Chen Wang is a MA Music Therapy student at Anglia Ruskin University. A skillful yangqin player, Chi-Chen was a special education teacher at a primary school in Taiwan. ‘Beautiful Africa’ portrays the vast wilderness of the savannah and warmth of the African people.
Chrysanthemum Terrace by Jay Chou
CUCOS Ensemble
The CUCOS ENSEMBLE plays the work of Jay Chou, a talented Taiwanese composer who successfully integrates Western musical elements with Chinese literature and musical traditions in his compositions. The piece portrays the chrysanthemum as a metaphor for love.

Congratulations to all our musicians, committee members, volunteers, and supporters for for their work in making the 2013 Concert: Chapters of Life a huge success!

“CUCOS has come so far, in music quality, visual presentation, audience numbers and publicity, and so on – the concert was professional and absorbing!”
-John Chen, CUCOS President 2011-2012

Photos of the performance have been uploaded here.

Tickets: £2 with reservation; £3 at door

To reserve: send your name, numbers of tickets needed and phone number(optional) to zy239@cam.ac.uk or 07801559488. Pay and collect at the door, no advanced payment needed. Advanced booking strongly recommended. 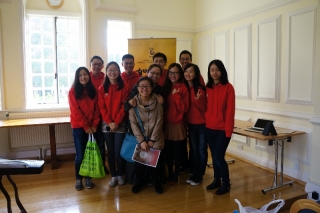 The photos for the 2012 Fresher’s Squash have been added (16 in total). Feel free to add captions in the comment! If you would not like to have your picture posted, email me at bw326@cam.ac.uk and I will remove the photo asap.

Enjoy what’s left of your weekend!

Our plan tomorrow is to get to know each other and play an abstract of the Butterfly Lovers. The music would be nice but easy.

For violinists: as the piece is a violin concerto, the solo part is extremely important. But it is also a golden opportunity to show your talent and improve your skills. Honestly, it doesn’t happen often that a whole orchestra accompanies you. If any of you is interested in being the soloist, do let me know at dz257@cam.ac.uk, or at the rehearsal.

Here is a Google map showing the location of the college shown below. The college is built with red bricks, opposite the University Library.

I have also included a map of Robinson College in the attachment. The music room has the Label 22, at the top right corner of the map.

Hope to see many of you tomorrow!